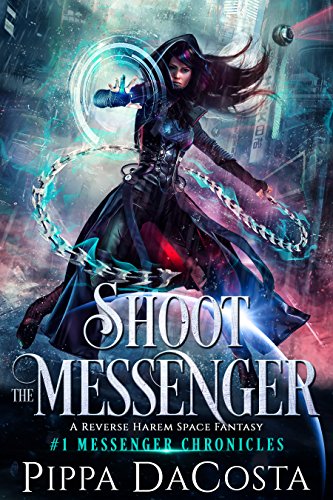 A new space fantasy reverse harem series where the guys are hot, the perils are many, and one rebel messenger holds the key to the survival of the human race.

Lies aren’t her only weapons against the fae…

In the Halow system, one of Earth’s three sister star systems, tek and magic—humans and fae—are at war.

Kesh Lasota is a ghost in the machine. Invisible to tek, she’s hired by the criminal underworld to carry illegal messages through the Halow system. But when one of those messages kills its recipient, Kesh finds herself on the run with a bounty on her head and a quick-witted marshal on her tail.

Proving her innocence should be straightforward. Until a warfae steals the evidence she needs. The fae haven’t been seen in Halow in over a thousand years. And this one—a brutally efficient killer able to wield tek—should not exist. But neither should Kesh.

As Kesh’s carefully crafted lie of a life crumbles around her, she knows being invisible is no longer an option. To hunt the warfae, to stop him from destroying a thousand-year fragile peace, she must resurrect the horrors of her past.

Kesh Lasota was a ghost. Now she’s back, and there’s only one thing she knows for certain: Nobody shoots the messenger and gets away with it.

IMPORTANT: The Messenger series is a reverse harem. The harem elements develop during the series. This series does NOT feature a love triangle.

Shoot the Messenger by Pippa DaCosta
My rating: 4.5 of 5 stars

The author has created a fantastical world at war. Tek vs. magic. Human vs. Fae. In its midst is Kesh Lasota, a street-savvy, whip carrying badass and illegal messenger of the Halow systems that hides in plain sight.

Told in the first person single point of view of Kesh, the plot goes off with a bang as she is wanted for the murder of one of her message recipients. From there, the author throws curve ball after curve ball and you never see them coming.

Setting a fast pace, we meet a host of characters, each more mysterious than the next. Kellee, Talon, and cast are enigmatic and had me flipping the pages eager for more about them. While only little nuggets are revealed this time around, I’m excited to learn more as the series continues.

True to its warning, this book is a slow-burn reverse harem story with several characters interested in the heroine. However, there are no love triangles and no sex scenes, though sexually charged scenes are present.

If you are looking for something unique with a perfectly executed plot twist or three and an end you won’t see coming, definitely give this one a try.

Born in Kent in 1979, USATODAY bestselling author Pippa— “Wait a second. Let’s cut to the chase. I write kick-ass urban fantasy & sci-fi novels with conflicted characters, breathless action, and no-holds-barred dialogue. My books may not leave you feeling all fluffy and warm inside, but they will excite you. There will be plot-twists, angst, probably a few dead bodies, and very likely your favorite character will turn out to be the bad guy. Don’t say I didn’t warn you…”