It took me years to find the courage to speak to Luka. He seemed exactly like me. Intelligent. Focused. Serious.

But he’s not the man I imagined.

His reality is cruel and dark. He traps me in his web, his power twisting tighter the more I struggle, until it’s hopeless. I can’t break free.

As he drags me unwillingly into his filthy world, I can’t ignore the terrifying idea circling my mind. What if I belong here with him?

Sordid by Nikki Sloane
My rating: 5 of 5 stars

Addison Drake is a goody-two-shoes. She’s lived her life striving for perfection; her dream of being a doctor drives her focus and has caused her to neglect everything else. Things like men, relationships, and a social life. So when her roommate invites her to a Halloween frat party, she decides it’s the perfect time to reinvent herself. Donning a naughty schoolgirl outfit, complete with pigtails, she swallows her nerves and heads out to her first party in ages.

Though she hasn’t seen him in two years, she’d recognize the guy manning the keg anywhere. Luka Markovic was the TA of her Calculus class two years ago. And the star in all of her fantasies. So, when he actually remembers her, she’s blown away and more than eager to spend a little time with this guy she is still insanely attracted to. Too bad for her Luka’s not a nice guy. And, while he may have missed his chance with her before, nothing is going to stop him from having her this time. 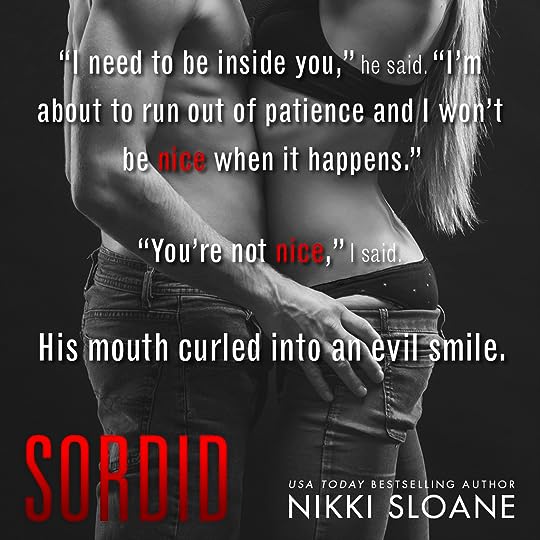 By now, you’ve probably heard that this book was banned by Amazon. And, because of that, you’re probably expecting that this is an incredibly dark read. Scary dark. Well, you’d be wrong. That’s not to say that this isn’t a dark book, it is. It contains elements that may be triggers to some, in particular date rape and graphic violence. That said, it doesn’t even scratch the surface of some of darkest books I’ve read. Books that are, ironically, still for sale on Amazon.

The first major scene between Addison and Luka is stark in its realism and, honestly, proved a challenge for me to read because it mirrored an event in my own life far too closely. I had to pause for a minute or two, quite a few times, just to get a handle on my thoughts so I could continue. The author does an absolutely incredible job setting that scene and showing all of the emotions and thoughts that Addison has throughout. As odd as this sounds, it was cathartic for me to read.

And while that section was dark, it gets even darker for the next few chapters. Those chapters, in particular, were stellar! After that though, it lightens up considerably. Personally, I would have liked to see one more dark scene before the transition to the lighter section to help me be fully invested in the change in Addison and Luka. Other than that, I loved everything about this book. It was unputdownable.

This may have been my first book by Nikki Sloane, but it sure isn’t my last. As a matter of fact, when I finished this book, I bought her whole backlist. This is easily my favorite Dark book so far this year.

*Psst* Nikki Sloane. I want that scene you deleted. What’s a girl gotta do to get to read that scene? Pretty please!

*Copy provided via Social Butterfly PR in exchange for an honest review.*

“So, Addison, we’re both stuck here for other people.” Luka took a step toward me, and even though there was still quite a bit of space left between us, his one small step felt enormous. Like he was now twice the size he’d been a second ago.

My chest was beginning to feel warm, no doubt from the tequila. “How is it you remember my name?”

“Probably for the same reason you remember mine.”

That was incredibly doubtful, but I kept my face plain. “Calculus was that memorable for you?”

“Yeah, it was. You were there every class, staring at me.”

I inhaled sharply, mortified, and tore my gaze away. “I did not.”

“Look at me.” His firm tone made it so there was no other option but to obey. When I did, his black eyes were focused and intense. “You stared when you didn’t think I could tell, but you weren’t very good at hiding it.” I opened my mouth to deny further, but he cut me off. “I was better than you. I made sure you never noticed I was looking.”

My brain disconnected and thought ceased. “Why?”

“What?” I was intelligent and well spoken, and yet I couldn’t choke out more than one word at a time.

Luka remained like a statue. He didn’t argue or defend himself, and tension wound around us like ruthless vines.

My question was breathy. “Why did you stare at me if you weren’t interested?”

“Did I say I wasn’t interested?” He took another step, growing larger still, reaching a point where I couldn’t see anything else. Just him. “Nobody looked at me the way you did, and I liked it. It’s exactly how you’re looking at me now.”

All the air vanished from the room.

“And how’s that?” It was dizzying when he took the final step and brought us chest to chest, his mouth inches from mine. Was any of this effect from the tequila, or was it all him? His gaze traced over each inch of my face, and I could feel it etching into my skin.

“Like you want me to do bad things to you.”

As he’d done, I stood motionless, neither confirming nor denying. I held my breath, waiting for him to make his move. I expected him to kiss me. Or maybe laugh in my face, although Luka didn’t seem like the type to laugh easily. He was deadly serious.

“Do you?” His question was soft and indifferent, even as it carried the weight of an enormous challenge.

Luka looked just as I felt—surprised by my admission. What had I just sort of agreed to? A tremble began in the backs of my knees and moved upward when his head tipped down. His mouth lowered until his warm lips sealed over mine.

Everything was madness. My actions, the situation, and most importantly, his kiss. I spun out of control under his mouth, surrendering to it completely, even as the kiss was tame. Luka pressed his lips to mine tentatively, but when I parted my lips to gasp, he took advantage.

His tongue dipped into my mouth and was an electric jolt straight between my legs. Did I taste like tequila as he did to me, or could he also taste my lust? I had two years’ worth, and this kiss broke the dam holding it back. It poured from me, and as I spun, I latched my hands onto his shoulders to keep myself steady.

What the hell was I doing?

Nikki Sloane landed in graphic design after her careers as a waitress, a screenwriter, and a ballroom dance instructor fell through. For eight years she worked for a design firm in that extremely tall, black, and tiered building in Chicago that went through an unfortunate name change during her time there. Now she lives in Kentucky and manages a team of graphic artists. She is a member of the Romance Writers of America, is married with two sons, writes dirty books, and couldn’t be any happier.